Im December Limón y Chelo will be open - in winter-mode, with a roaring fire - on Friday and Saturday nights 7 - 11.30 p.m., for Sunday lunches 1 - 4 p.m., and, of course, for members' private dinner parties. On other nights there are plans for a Cine Club, a revival of the Lingo-Club, and some special Christmas events.

Watch this space, in a short time we are ready to present our December and Christmas event calender! 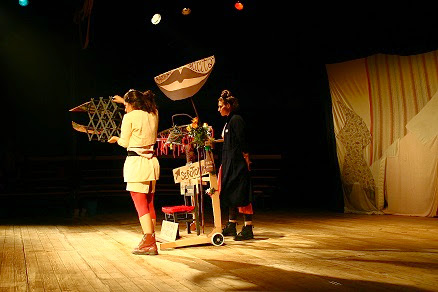 'La Máquina de la Felicidad' is coming to Sa Taronja! A piece of extravagant theatre in which Goia and Felicité, two travelling sales reps of happiness, will convincingly present their proposal for reaching the absolute heights of well-being.
A grotesque comedy that mixes humor and slyness with a style that borrows unashamedly from POP and will leave no-one indifferent.
A creative project by and with Serena Galante and Manon Lheureux (Pop N'Coeur). Set Design by Selim Sainz.

Saturday, 15th of November in the Sa Taronja Theatre at 8 p.m.
Admission: 4€ 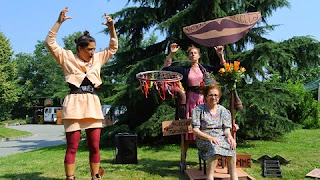 Note:  on Nov 15th (exceptionally), Limón y Chelo will be open from 7 p.m.
WINTER SEASON HOURS for LIMÓN Y CHELO: From Nov 28th, the restaurant will open every Friday and Saturday night, and Sundays at lunch.
There will be SWING music in the restaurant on Friday 28th at 8.30 pm, live music night with Fernando Rubin and Carmen Jaime on Saturday 29th, and a Jazz-Lunch on Sunday 30th.

Details to be announced 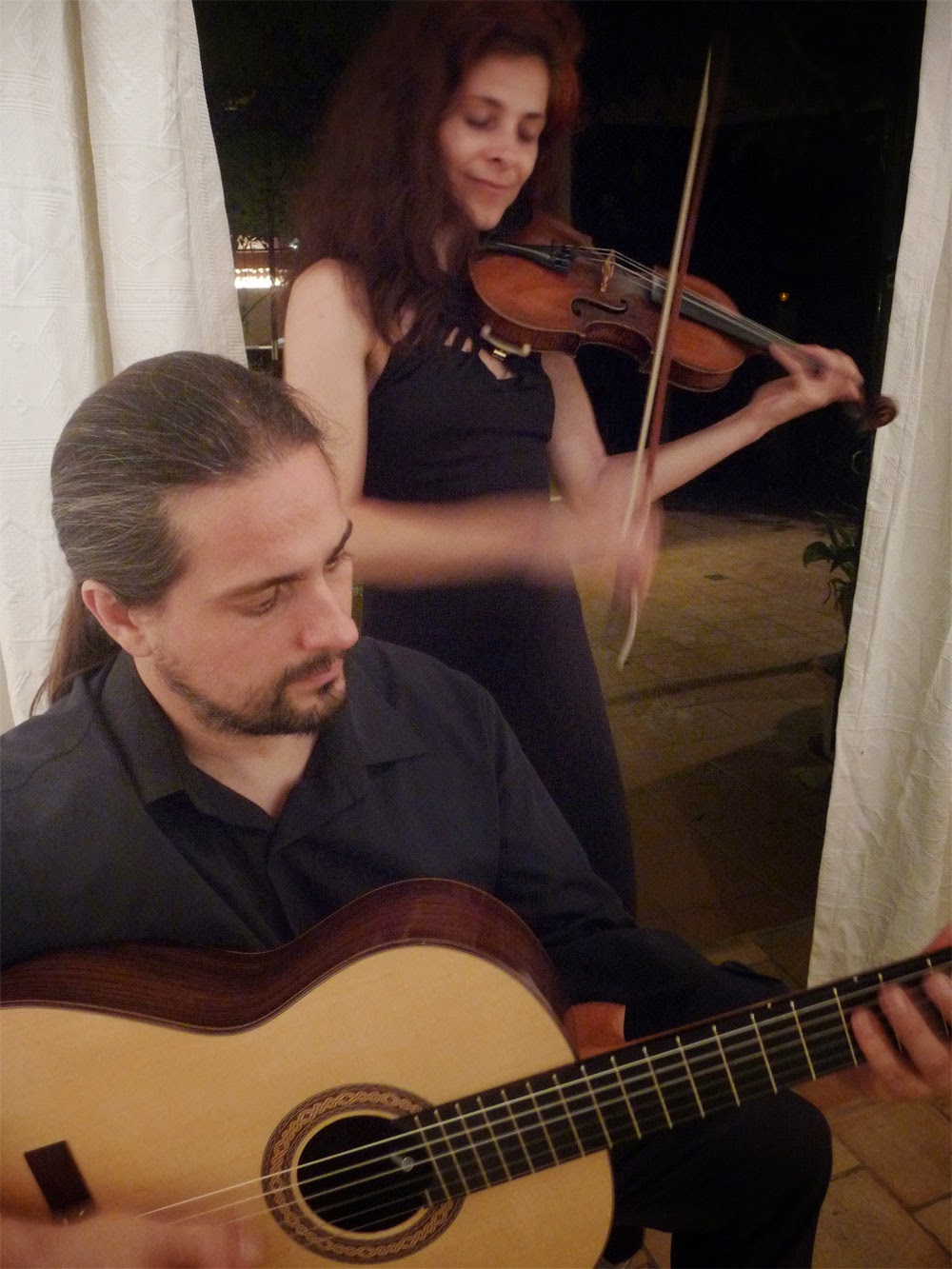 with some live SWING music by Fernando Rubin (guitar) and Soriana Ivaniv (violin). 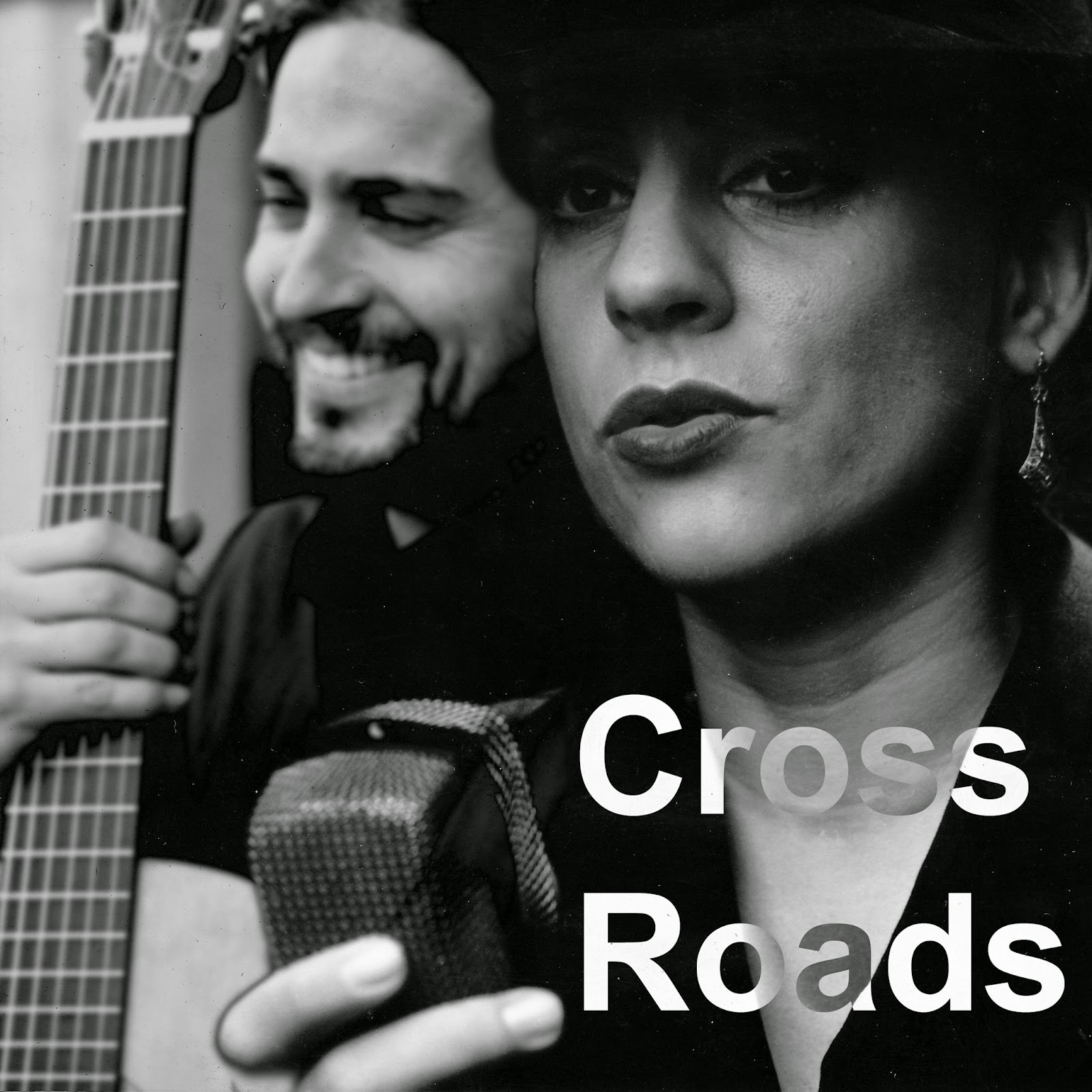 The meeting of two roads from the other side of the ocean:
In the south, the road that runs between Montevideo and Buenos Aires.
In the north, between Chicago and New Orleans. The sounds echoing through the suburbs of those cities in the first half of the twentieth century were African rhythms, which grew into two of the most influential musical styles of the century, tango and blues.
We'll be hearing some of the classics of both genres in the performance of Majorcan blues singer Carmen Jaime and Argentinian guitarrist Fernando Rubin in Limón y Chelo on Saturday night.
um 9:23 AM No comments: 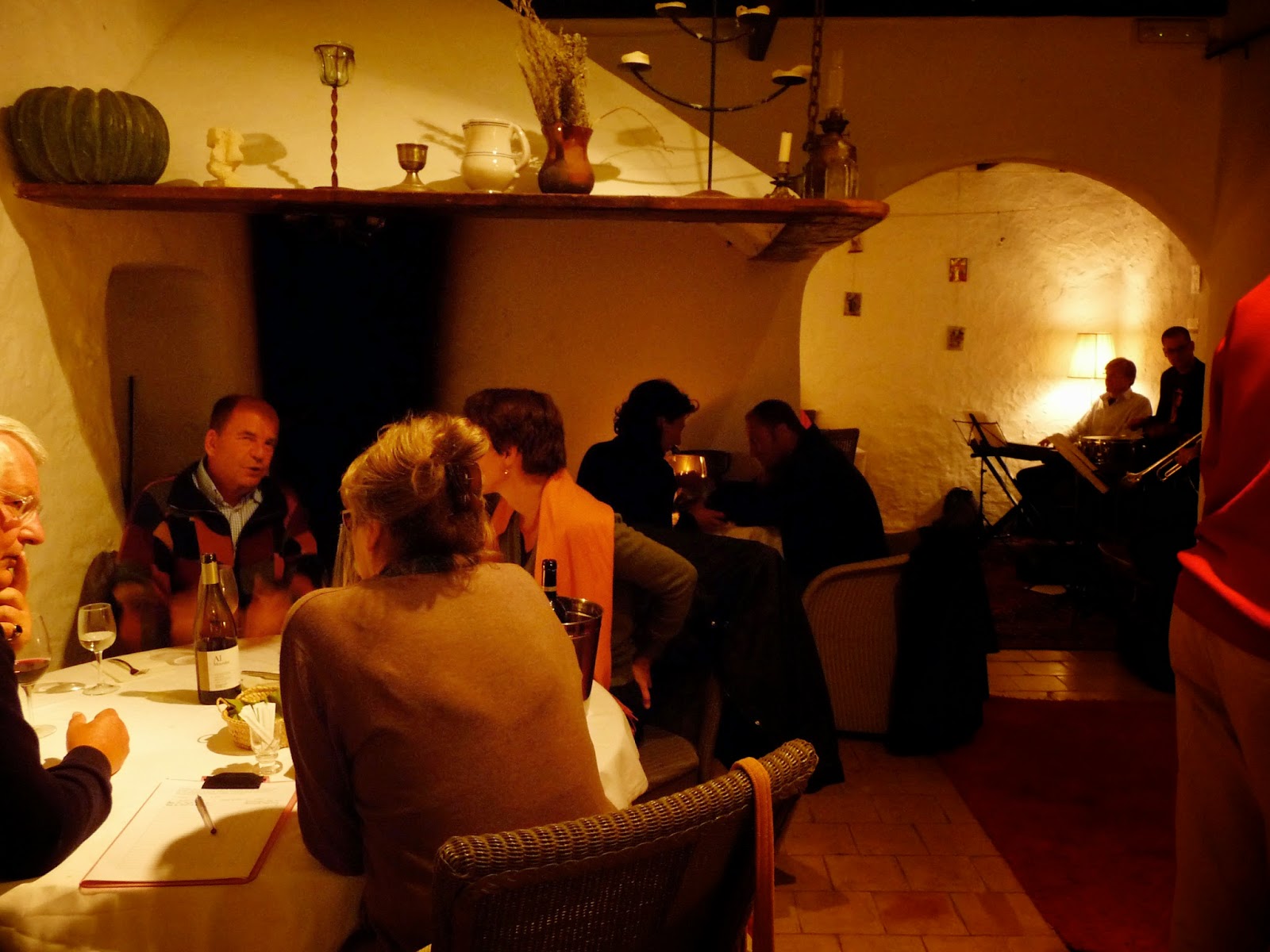 The Restaurant opens for lunch at 1 p.m. -
indoors, with a roaring fire. 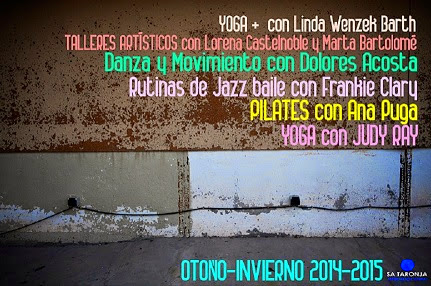 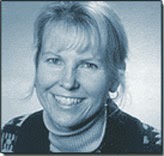 Course about “Well-aging“. (remaining 4x) In addition to learning the Five Tibetan Rites in order to keep our hormones in balance, we will be practising Yoga using the Anusara elements of proper alignment to keep ourselves fit, limber and full of energy for years to come. Anyone can join at any time. (The class will be given in English but German and Spanish is spoken as well.)
The course is given by the German-American naturopath Linda Wenzek Barth.
**Linda donates the whole income from these classes to Sa Taronja.  Thank you, Linda!** 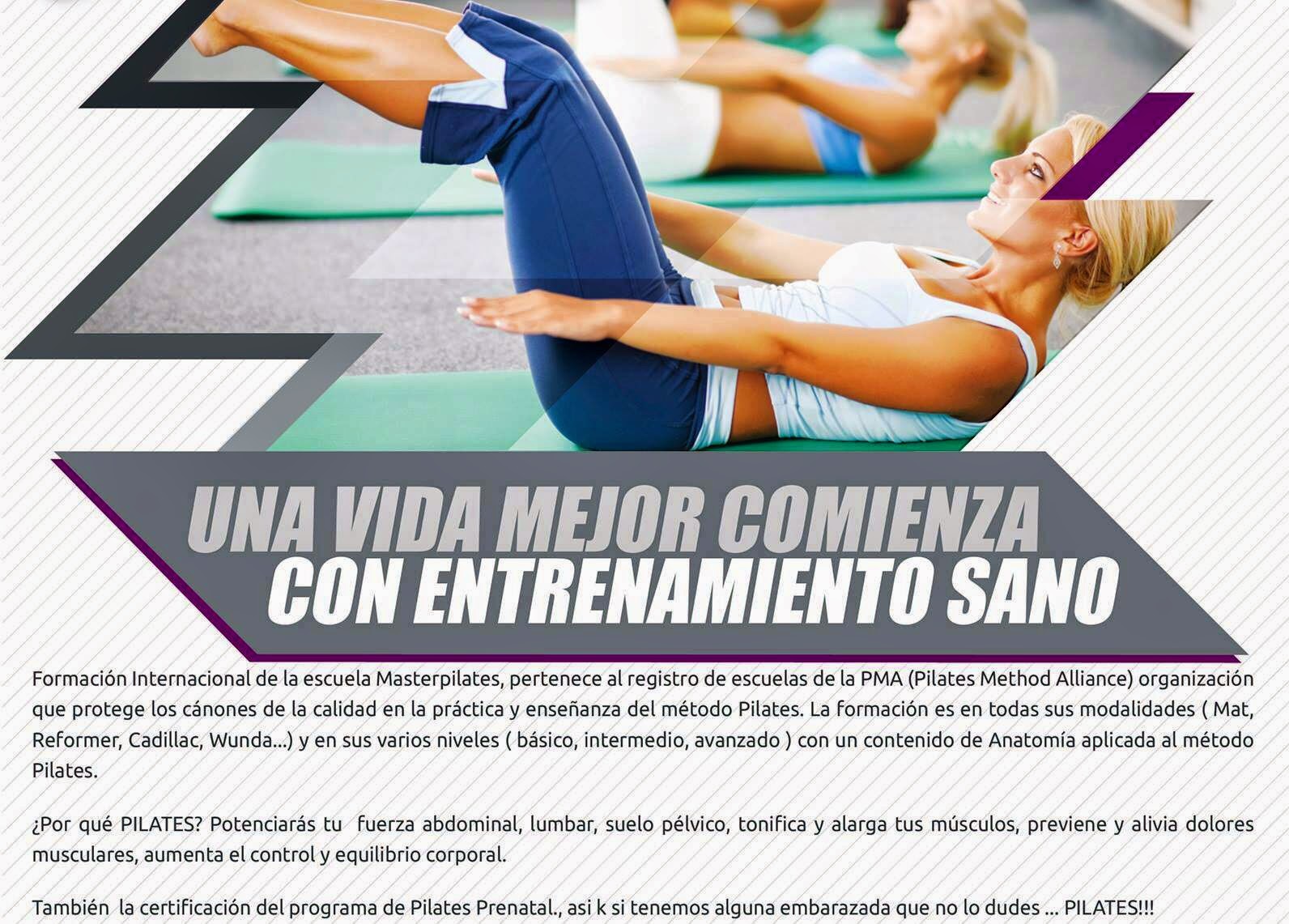 
Strengthens, tones and stretches your muscles.  Provides balance and flexibility.

Gets you into good physical and mental shape. 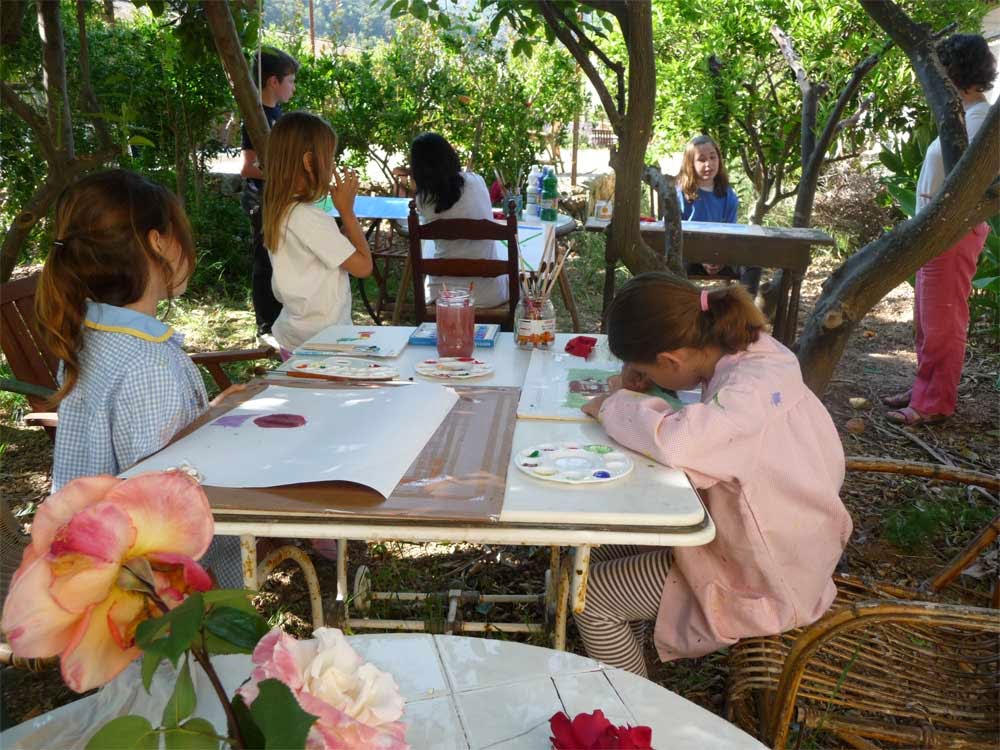 ART CLASSES FOR CHILDREN AND TEENS
with Lorena Castelnoble and Marta Bartolomé:

In our workshop, we see art as a means of relating to oneself and to the environment. Considering that each child is a creative being with an innate need to explore and investigate, we emphasize the imaginative process and encourage children in their creative thinking by providing the tools and the setting for it to flourish.
Marta Bartolomé is painter, a fine arts and art history graduate, with post graduate studies in art therapy.
Lorena Castelnoble is a sculptor, studied at the School of Arts and Crafts, Universidad del trabajo, Uruguay. 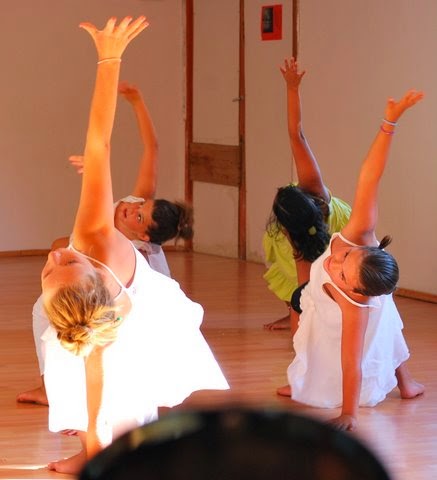 DANCE AND MOVEMENT
with Dolores Acosta

Dance and Movement for adults. An investigation of movement aimed at developing the body and its relationship with space, listening, and creativity.
Wednesdays from 6.30 to 8.00 pm.
Fee: 40 € /Month
Info: Dolores Acosta: 687 668 832 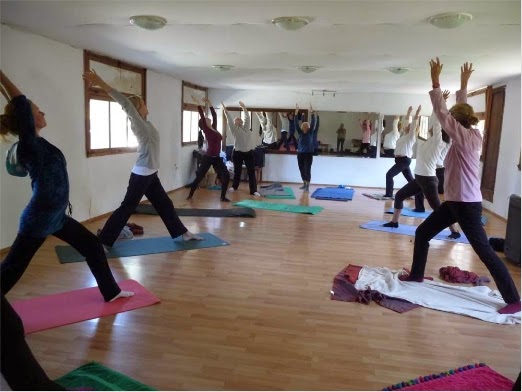 Yoga for all, from beginners to advanced.
Classic Hatha Yoga, meditation and relaxation with music. This popular form of Yoga stresses the connection, balance, and attunement between the physical and mental while moving through the exercises. We emphasize the importance of each person working at their own level, with their own individuality, while striving for greater strength, flexibility, and concentration.
Bring your mat and water.
Friday from 10:30 to 12:00 am
Info: 630 917 190 - Fee: 5 € per day 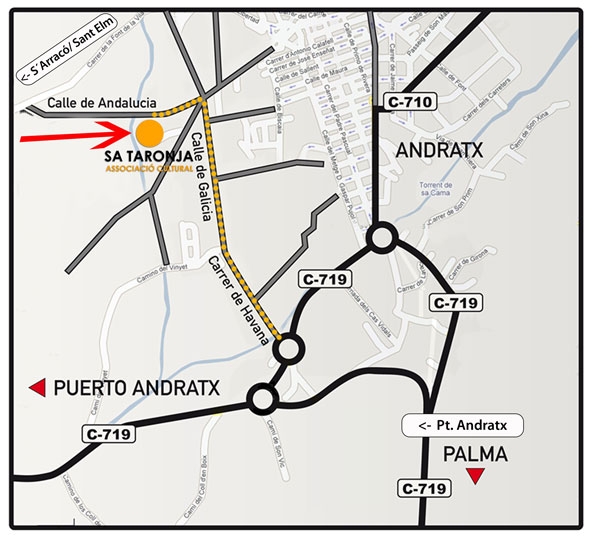