thank you for your patience over the last couple of months.  We are now planning some events for the July-August season that we hope will make the wait worthwhile.  We will be announcing the programme at the end of this month.

Meanwhile, there are a couple of changes and additions to the schedule of courses at Sa Taronja, and a musical event later this month.

It will be an evening in homage to our dear friend, musician, cook and tireless volunteer Arthur Vaughn who left us so suddenly on May 11th.  There is another concert planned on Saturday, August, 13, with participation of his musician friends from Germany and England but that is still a long way off, so on Saturday June 25th we pay our respects to this loyal friend of Sa Taronja with a concert, a DJ, a show of art and crafts and a Jumble Sale,  with the object of raising some funds to go towards the expenses of his funeral and the maintenance of his animals until they are adopted.  We hope you can come. Details below. 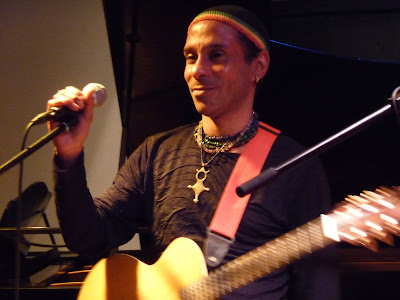 
Arthur Vaughn Richards, or “Island Monkey” as he called himself, was a wonderful person.  This small man with the big heart who lived deep in the woods between Port Andratx and S’Arracó was known and loved by many of us.  His house was always open to anyone in need, anyone wanting to share joy or sorrow, or just to hang out with Arthur, listen to music, surrounded by the animals he loved.
On May 11 Arthur left us for ever.  We remember him as a sensitive, generous, deeply caring friend with the great heart of someone who accepted and respected every living being for what he/she/was.
Arthur expressed himself best through his music. Many of the songs that this highly talented musician left us are full of references – sometimes ironic – to the kind of problems a sensitive artist like himself had with his surroundings and with human relationships.  Songs which, like “Monkey from Africa” written a few years back, give us unforgiving glimpses into his biography and his sometimes tortured life, “dark brown outside, white inside” which sometimes met with incomprehension.  But that too was a part of him: the dark-skinned man, struggling with his complexes in the white world. In “Breaking out of Sadness” he speaks of wrestling with his pain and inner loneliness, and the all-encompassing longing for love.
What is clear is that he has gone before his allotted time.  That he – and his body – did not want to continue the struggle, we must accept, like it or not. Arthur carried, apart from his inexhaustible belief in love, a lot of painful baggage within him, spiritual as well as corporal; despite being torn up inside, body and soul, in recent times he was still full of plans even though part of him could not and would not go on.  Friends and fellow musicians were about go into the studio with him to record old and new compositions. They will have to change their plans.
This summer, probably in August, some of his friends will get together in Mallorca to hold a concert in his honour and present a selection of his best songs.  Arthur died full of inner riches, but he lived in poverty.  So the concert, which will celebrate the memory of a man who loved to sing, to party and to dance, will also serve as a fundraiser to help cover the funeral expenses and costs of dealing with his estate… which includes his four-legged friends.
We miss you, Arthur, old friend!  - You live on, in our memories and in your music.

Dear Members and Friends of Sa Taronja:
In addition to continuing the Spring workshops, there are two new courses starting up in Sa Taronja: Ceramics and Acrobatics.

As we have already published on our Facebook page, the Monday Film cycle is being suspended for reasons of internal reorganization.

During the coming weeks our priority is making contact and organizing appointments with the authorities and various institutions with a view to assuring collaboration and support for Sa Taronja.
For this reason we have decided to postpone the Annual General Meeting of the Board until the end of June 2016, to be able to present the outcome of our research and interviews.

Thanks for your support! 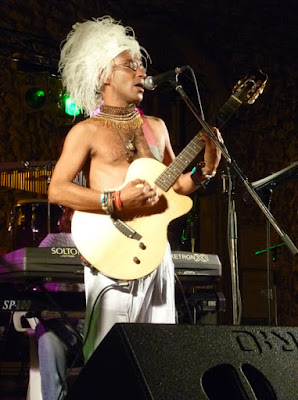 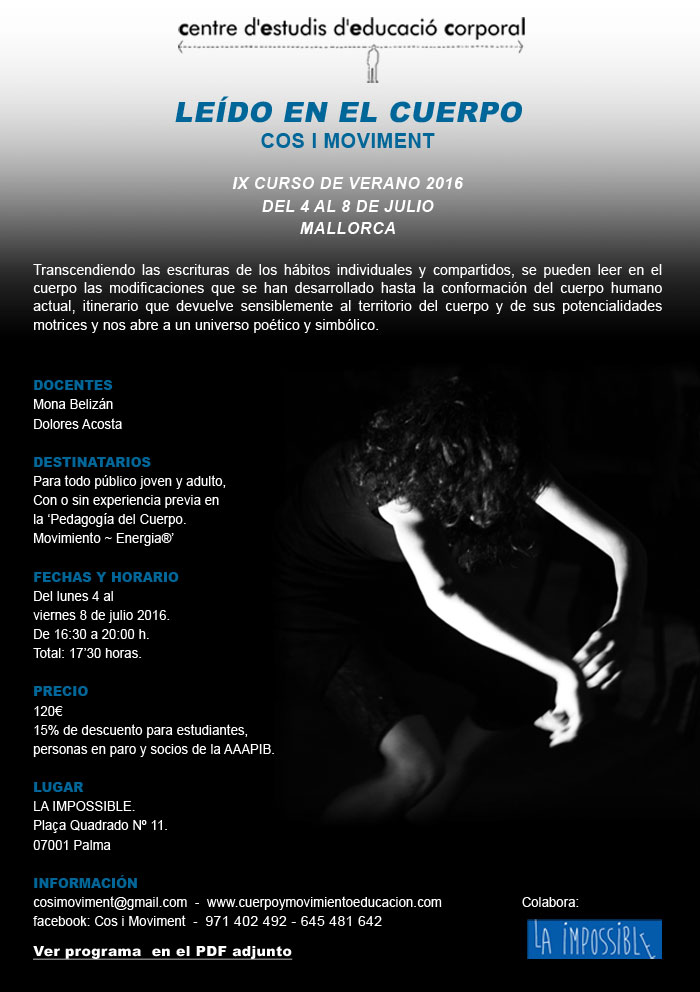 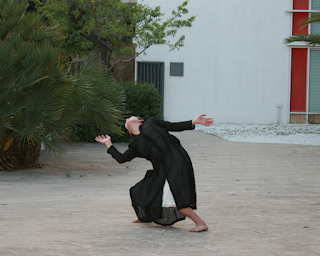 Dance workshop:
About body sensation - inner and outer of the body.
with Hisako Horikawa

Each part of the body is alive and the body is organizing itself. We will encounter the movements of the body, in order to contact and work together with body.  How you receive the environment, how you perceive the sensation of the body. It is about communication of yourself and the body and space, that leads to dance. We are just a part of nature and the world.  Anyone who is interested in the body can attend the workshop.
Hisako Horikawa

THE WORKSHOP
This is the second time Hisako Horikawa will visit Mallorca. The workshop will be held at the Sa Taronja Cultural Centre, an old chicken farm and finca in the southwest of the island which became a place for art and culture almost 20 years ago. The workshop will take place inside the dance hall and outside in the gardens and spaces of the Centre,  where there is plenty of room to accomdate everyone who might some from further afield.  The workshop will be taught in English with translation into Spanish.

THE MASTER
Hisako Horikawa (Niigata, Japan) has studied improvisation music and was a voice performer before dance. Since 1978, she has been enquiring into the body and dance with Min Tanaka. She was the co-founder of the Body Weather Laboratory and until 1998 she was working and dancing with her troupe Maijuku directed by Min Tanaka. In 1998 she began to work on her own and went back to Niigata. Today, she mainly does solos and improvises with a variety of artists and musicians in different countries. She  dances  outside predominantly using old buildings, empty factories, roads  and natural setting as her theatre. She also collaborates with local artists, traditional musicians and non-professional theaters in her city. Since 2005 she has visited and participated in  the traditional dance - Bon Odori. She was artistic co-director at The Water and Land - Niigata Art Festival 2012.
In Spain, she performed for the first time in a duo with Min Tanaka at Teatre Lliure in Barcelona Olympic Art Festival. In 2001 she started to work with Andrés Corchero and L'animal a l'esquena in Dies de Dansa festival in Barcelona, she performed in En Pé de Pedra dance festival in Santiago and in The White Night in Madrid. Since 2005 she has given workshops in Estudio3 in Madrid and she has performed in Teatro Pradillo and in CSA La Tabacalera de Lavapiés. She also performed at the village of Hoyocasero in Ávila. Since 2001, Hisako gives body weather workshops around Europe and Spain. 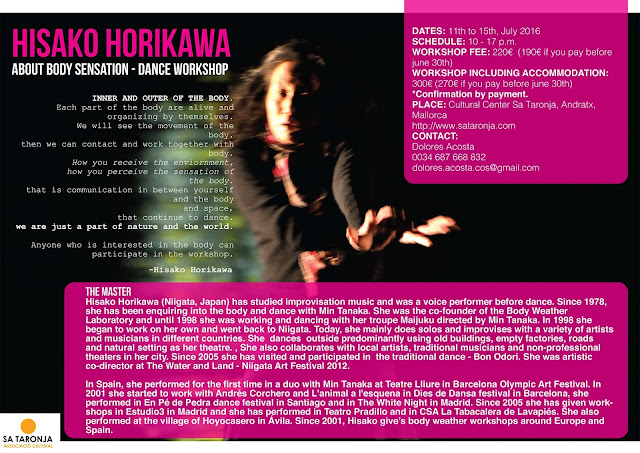