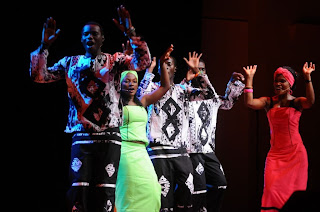 Six warm voices, six young adults full of energy, humour, and joy. Their music has an original sound that is based on music traditions from Uganda . Their a cappella repertoire includes songs in Swahili, Luganda, Fang, Zulu, Lutoro, Acholi and Runyancore among other languages of their ancestors. Aba Taano means “the five” in Lugandes… but now they are six.

Over the last five years, they have toured in many of the most important concert halls in much of Spain as well as in Holland, Estonia, Hungary. In 2011, they are adding Austria to their list of countries where they have visited and performed and in January 2012 they will go to California. In a tour with the choir Uganda Natumayini, they performed in theatres as important as the Teatro Real, Auditorium Reina Sofia in Madrid, the Baluarte in Pamplona, the Teatro Arriaga in Bilbao, the Casa Encendida in Madrid, the Teatro Central y Lope de Vega en Sevilla. The Teatro Principal de Orense, the Teatro Falla de Cádiz, the Teatro Circo en Albacete, the Palacio de Exposiciones y Congresos en Teruel, and the Teatro Palau de la Música en Barcelona, among others. They were also the musical representatives of Africa at the World Expo in Zaragoza, Spain in 2008.

These tours have been critical to raising the funds necessary to cover the costs of education and living expenses in Uganda. It is the generosity of those who see their shows and hear about their performances that make it possible for these children to study, practice their music and live as a family at the orphanage.
They are the first musical group to come out of the orphanage of Musica Para Salvar Vidas.