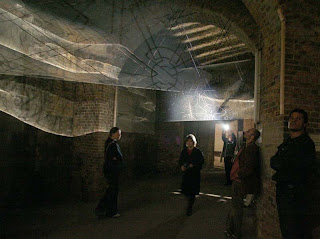 Busch's oeuvre includes Installation, live performance and software he programmes himself. Originally from a video background, Busch now creates with computers, and his artworks are engendered by, and deal with, the digital world. The main thrust of his work is the development, using modern means, of the tradition of patternmaking, following the centuries-old practice of arabic non-figurative decorative art, such as that seen in the Alhambra in Granada. He makes use of the computer to construct and create patterns and explore the world of images contained in them. As indicated by his motto "Media without media" , the computer is not present in all his work, although traces of it are always perceptible. His most useful tool is the software MAX/MSP and Jitter, which he also teaches in workshops.

Busch has exhibited in Berlin and other German cities, has presented his work at conferences dealing with Architecture and Media Theory, and has recently co-published a scientific paper on Ubiquitous Computing.

He is currently artist in residence at Sa Taronja, where he is working on his latest project, "Mustermaschine" (the Pattern Machine).